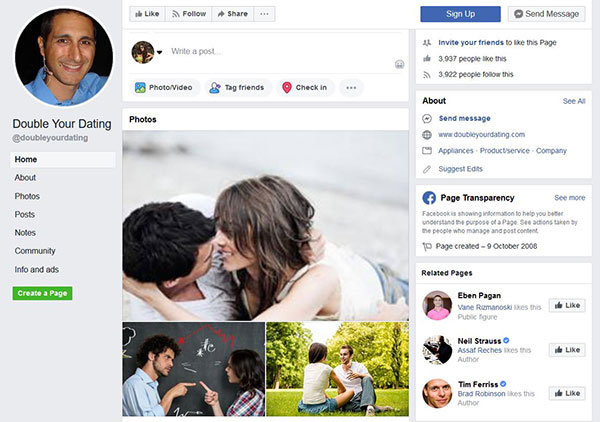 This Facebook page is run by David DeAngelo whose real name is Eben Pagan. The reason he used a pen name for Double Your Dating is that David DeAngelo sounds more romantic. Another reason is that most dating coaches don’t want to use their real names in this niche. For instance, when Richard la Ruina went out on dates with a hot woman, he was in trouble because that sexy girl Googled his name on the Internet &also, he couldn’t upload infield videos for that reason. Clearly, Eben Pagan operates differently: First of all, he used a pseudonym name David DeAngelo for his dating advice brand and then uses his real name for his second brand which teaches Internet marketing, getting rich quick and working from home. Secondly, he is the godfather of content marketing – He invited many dating expertswho weren’t working for his company to speak at his events. At that time, many people couldn’t understand why he would promote his competitors like that. Then Owen Cook famously said, “Do you know who made more money than anyone else in that process? David DeAngelo himself! That’s because he made 20% from every speaker at his event & the overall math tells you that he made more money in the end.” David DeAngelo married Annie Lalla (love coach for singles and couples) in 2011. Although some of David’s content is controversial, many people have benefited from his teachings (e.g. Mike Watts – Kate Northrup’s husband). Therefore, you may want to check out his Facebook page. 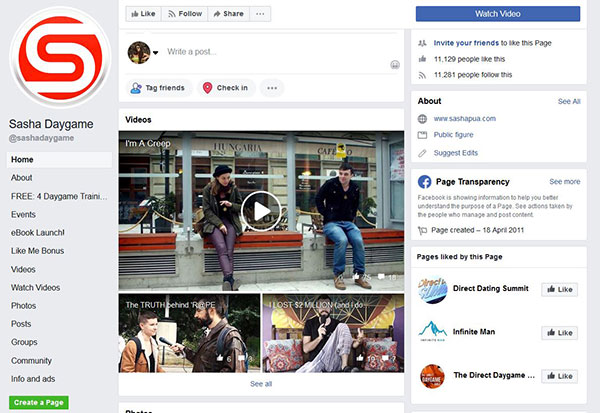 Sasha Daygame used to charge top dollars for his pickup artistry training bootcamps, but he never pushed his marketing hard enough to reach seven figures. Anyway, he still made a lot of money by teaching day game because his day game is the best. Although he recently changed his direction in business (he has started to focus more on lifestyle development rather than picking up girls in the street), his Facebook page still has a large amount of information about how to pick up women. Well, it seems that his business style is a serendipity style, i.e. a free-flowing style. However, Roosh V disagrees with the direct day game approach because he doesn’t think men should put women on a pedestal by paying women compliments like that. 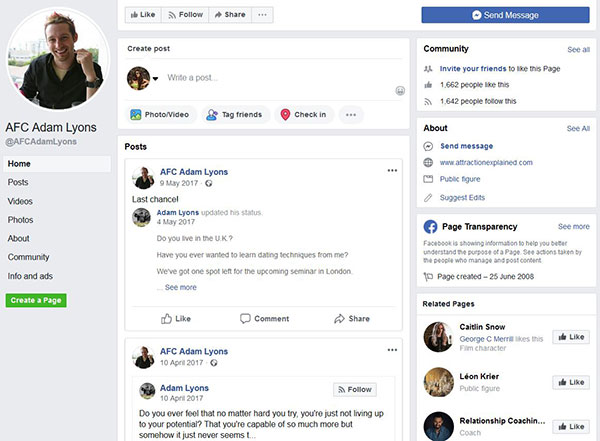 Adam Lyons has worked for PUA Training in London and is an established and sophisticated dating coach for men. It seems that his Facebook page hasn’t been updated since 2017, so clearly, it’s not easy to run an online business in this niche because most men don’t want to share his posts on social media. Indeed, how many men actually dare to share information regarding dating advice with anyone? Every man has an ego and no man wants to admit that hisdating life sucks. That’s why running a dating advice business is hard. Another reason why teaching pickup artistry is difficult is that many dating gurus don’t know what to say in today’s day and age due to the Me-Too movement, Men Go Their Own Way (MGTOW) movement and feminism in western countries. Adam Lyons’s Facebook page has 1674 likes and 1632 followers today (17th February, 2019) – What does that mean? Well, that means some people have unfollowed him, but they don’t want to offend him. Usually, a successful Facebook page should have more followers than likes, because if someone wants to follow a Facebook page but doesn’t want anyone else to know it, this follower will remember the content on this Facebook page very well (it’s like a secret between this follower and this Facebook page). For instance, Jade Seashell’s Facebook page doesn’t have many followers because most of her business activities are content partnership with dating advice companies – she doesn’t spend a lot of time on social media. But her followers are mostly VIPs in this industry. Another example is Edward Druce who doesn’t even use social media because all of his clients are MVPs. In other words, B2B business owners don’t give a f**k about social media. Yes, it’s not about quantity; it’s all about quality. We also know some so-called “internet celebrities” with thousands of followers on Facebook, but those followers are their family and friends rather than actual customers.

Written By
More from
When it comes to dating, many people don’t consider the fact that...
Read More